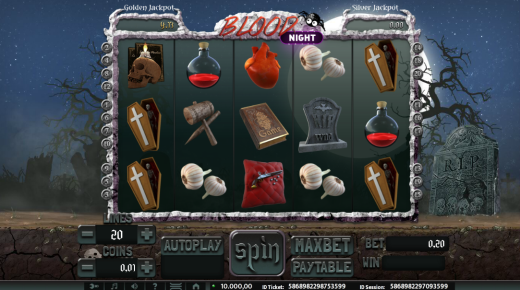 The vampire theme has always attracted a large group of fans and, especially in recent years, has been widely developed in novels, TV series and films: hence Blood Night, a game with dark colors and full of atmosphere.

The game opens with an image of a tombstone surrounded by bats highlighted by the full moon, while the game screen is located in a graveyard at night, with the reels in the center and the setting buttons at the bottom, as if they were underground.

The symbols that alternate on the reels of Blood Night are entirely thematic and include: magic potions, two cloves of vampire chasing garlic, a tombstone, a hammer with a stake, a pistol on a red cushion, an anatomical heart and a skull with a candle.

Finally, the theoretical return to the player is really high, reaching an excellent 97.35%, definitely above average! 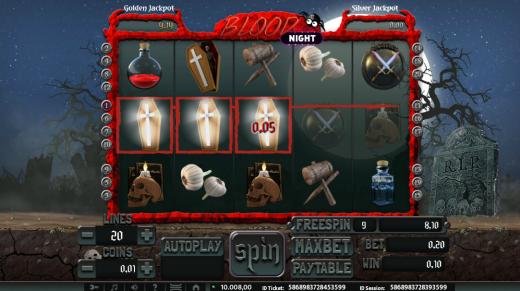 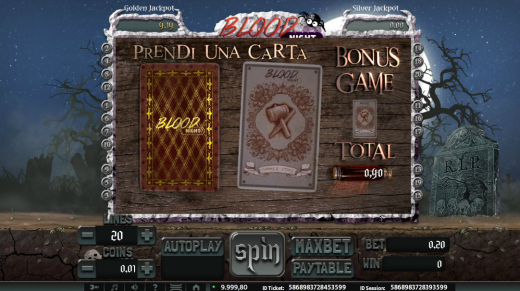 Wild Symbols: The Wild symbol is a gravestone, it acts as a wild card and can replace all other symbols except for the Scatter and the Bonus, but it can also form winning combinations by itself.

Scatter Symbols: The Scatter is represented by the swords and when it appears at least three times it allows you to access the free spins in which it also gives you multipliers, up to a maximum of x150!

Bonus Symbols: The Bonus, that is the image of a book, allows, if at least three of them appear, to access a mini-game of cards with which to try to take home some extra winnings.